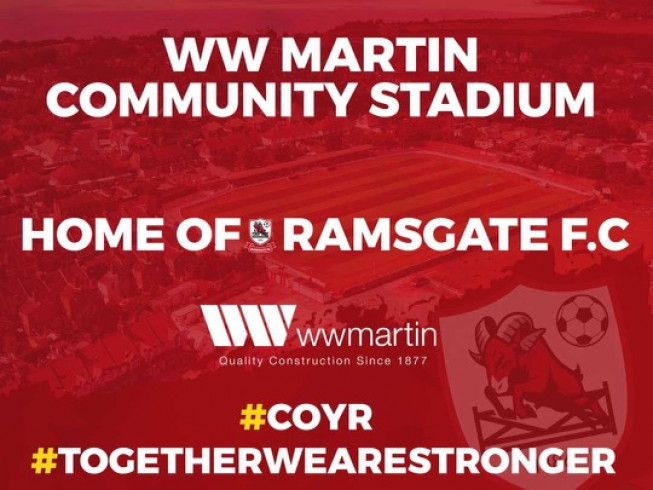 We are delighted to announce an exciting new sponsorship agreement between Ramsgate FC and WW Martin Ltd.

Following the installation of the new state of the art 3G playing surface at the Ramsgate FC home ground, they now offer one of the best playing surfaces in Kent. This fantastic new facility at the club provides an all-weather playing surface accessible to all age groups at Ramsgate FC from the Under 6’s all the way to the First Team squad.

On the back of this work, as the club continues to drive forward, Ramsgate FC have today shared details of our new sponsorship agreement and have formally announced that the home of Ramsgate FC will be renamed the ‘WW Martin Community Stadium’. Ramsgate FC have highlighted our longstanding and ongoing support of the club, and they are delighted to move forward to the 2021/22 season with great excitement for everybody associated with the club.

“The investment in the club and the passion of the team at Ramsgate FC to raise the standards and extend their coaching work to further benefit the local community is hugely commendable and the reason why we are delighted to continue our support of the the club as their main sponsor.”

“To see the stadium named after WW Martin is very special and we are very proud that Ramsgate FC have made this kind gesture. As a construction company that has been based in Ramsgate since 1877, the Community Stadium is very fitting to the values of our business and highlights the commitment and work of everybody involved with Ramsgate FC.”

With the new season set to get underway later this summer, players, supporters and parents can look forward to a number of improvements being made at the club. The newly installed pitch affords a great view of the action and the wider community can now access the new facilities at the WW Martin Community Stadium, Home of Ramsgate FC.

“The improvements at the club and the ongoing support from WW Martin is fantastic. This new sponsorship agreement is helping us to deliver so much more and we are excited that the new facilities at the WW Martin Community Stadium allow us to have the whole club in one place, bringing a real sense of togetherness for everyone involved at Ramsgate FC.

We have so much planned with the local schools, our own teams and coaches, local companies, and new 5-a-side competitions, this really is an exciting time!”

The club will be hosting football for more than 1000 youth team members as well as the First Team and U23s Squads, along with several multi-sports and other community events thanks to the new facilities being available to schools, colleges and community groups in East Kent.