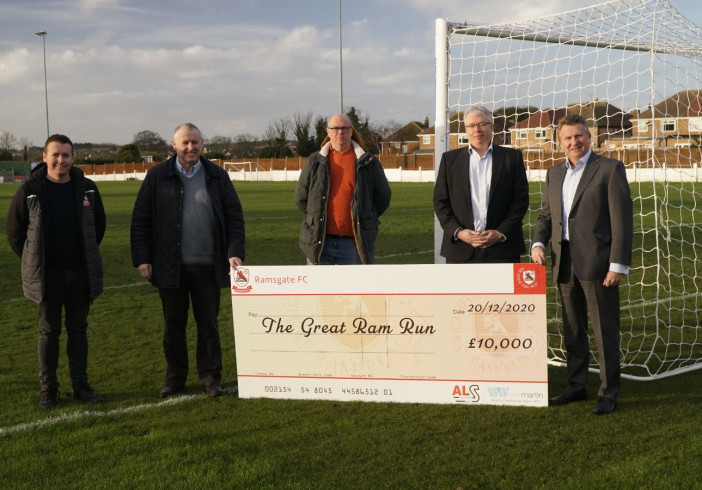 Directors, Mike Darling and Ian Posnett were delighted to recently present a cheque to Ramsgate FC for completing their extra-ordinary challenge to run thousands of miles to raise money for local charities.

‘The Great Ram Run’ was an ambitious 6,000-mile run, which was plotted around all Step 4 Isthmian League Football Clubs, starting and finishing at Ramsgate Football Club.

For every mile of the 6,000-target achieved, WW Martin Ltd and ALS Civil Engineers Ltd pledged to donate £1 to Aurora, a local nine-year-old girl who has a rare cancer that affects blood and bone marrow, and who is trying to reach a target of £300,000 for surgery.

Presenting the cheque at the end of last year, Ian Posnett said:

As proud long-standing sponsors of Ramsgate FC, we are delighted to present this cheque for £10,000 alongside fellow club supporters ALS Civils after the fantastic effort of everybody involved in ‘The Great Ram Run’.
Not only has the initiative helped raise money for Aurora, donations have also been made to many other local charities chosen by each Football Club on the route.

You can read more about Aurora’s story and how you can help her reach her goal at: https://www.justgiving.com/crowdfunding/aurorasjou...

On behalf of everyone at WW Martin, we congratulate everybody that has taken part and send Aurora and her family the very best wishes.